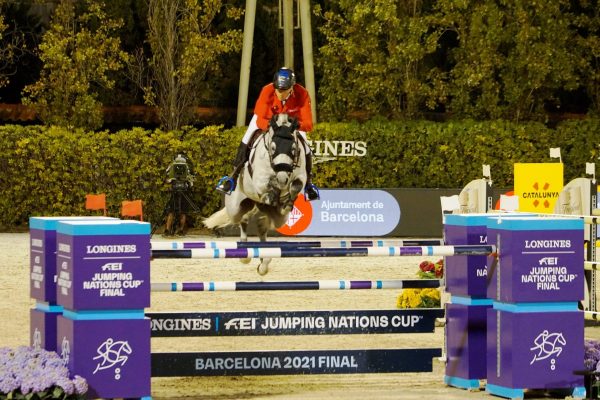 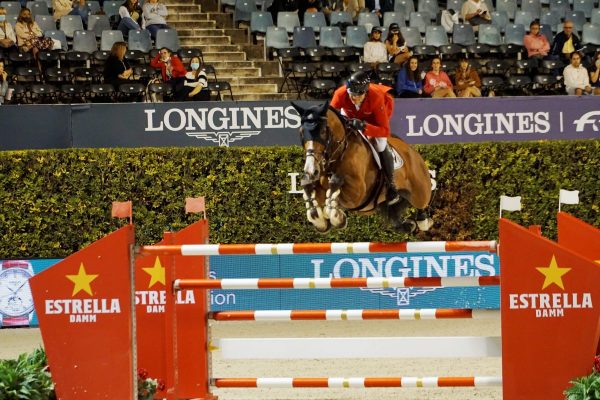 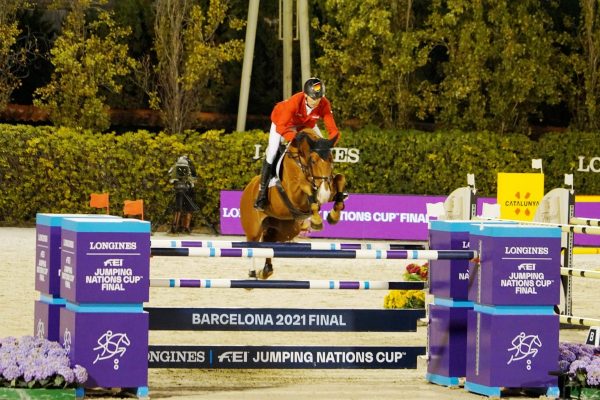 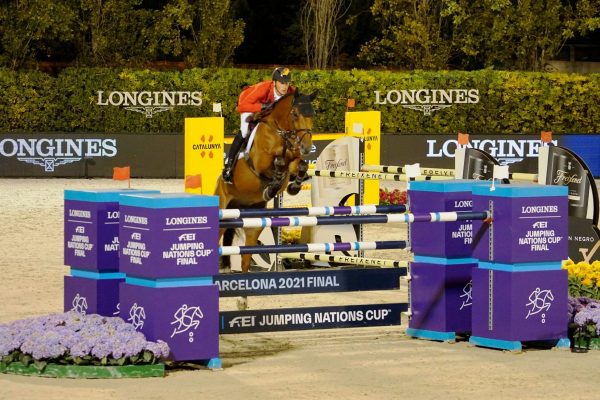 Team Germany clearly meant business when sending a crack team to the Longines FEI Jumping Nations Cup™ Final 2021 in Barcelona (ESP) where tonight they put their stamp all over it when winning the first competition with a total of just two time faults.

World number one, Daniel Deusser, set the stage with a superb clear from Killer Queen VDM, and when the newly-crowned individual European champions Andre Thieme and DSP Chakaria put just one time fault on the board then they were already looking strong.

When David Will and C Vier 2, who along with Thieme was a member of the German side that won European team silver four weeks ago had two fences down and a time fault it didn’t look quite so promising. But anchorman Christian Ahlmann strolled around the track with Clintrexo Z to wrap it up with just one time fault to add to their tally when the best three scores were counted.

Spain sprang a big surprise when finishing second with just three time faults while The Netherlands lined up in third with four faults and Brazil slotted into fourth with a total of five.

Only the top eight teams are eligible for Sunday’s finale and the remaining four places went to Sweden (9 faults), Ireland and USA (10 faults apiece) and Belgium who finished on 12 faults.

Norway also finished on 12 but their slower combined times leave them going through to tomorrow night’s Challenge Cup along with Great Britain, Italy, the recently-crowned European champions from Switzerland, France, Canada and Uzbekistan.

Team Germany strolled nonchalantly into Sunday’s deciding round of the Longines FEI Jumping Nations Cup™ Final 2021 when heading the leaderboard tonight after the first round at the Real Club de Polo in Barcelona, Spain.

But for the newly-crowned European champions from Switzerland it was an entirely different experience when they finished 12th of the 15 competing nations, missing the cut into the top eight who will battle it out for the title on Sunday afternoon.

Instead they go into tomorrow night’s Challenge Cup in which they won’t just be hoping to restore their supremacy. They will also need to ensure they finish ahead of Norway, Great Britain, Italy and France because one of those five countries will be relegated to the EEF series in 2022 when finishing last of the Division 1 teams at this year’s Final.

With two of the greatest combinations in the sport right now – world number one Daniel Deusser with Killer Queen VDM and Andrew Thieme and DSP Chakaria who recently claimed the individual European title – in the German side they were always a powerhouse, but few would have expected the host nation of Spain to be their closest challengers. Germany collected just two time penalties for the win, but Spain accumulated just three to finish second ahead of The Netherlands in third place with four while Brazil slotted into fourth place with five faults.

The Tokyo 2020 Olympic champions from Sweden racked up nine faults for fifth while both the defending Longines FEI Jumping Nations Cup™ champions from Ireland and Team USA collected 10 faults each, the Irish combined times giving them the advantage when they were almost four seconds faster. The eighth and last qualifying spot went to Belgium who shared a score of 12 penalties with Norway but who were considerably quicker.

When the second Final competition kicks off on Sunday afternoon, Germany, Spain, The Netherlands, Brazil, Sweden, Ireland, USA and Belgium will all begin again on a zero score.

Longtime Barcelona course designer, Spain’s Santiago Varela who also masterminded the tracks at this summer’s Tokyo Olympic Games, set them a test that Switzerland’s Bryan Balsiger described as “nice at the beginning but more technical at the end and the time is tight” after posting a four-fault result with TwentyTwo des Bisches. He said the mood in the Swiss camp after their European victory in Riesenbeck, Germany four weeks ago was good – “we are friends and we worked together for the gold medal but today is another show and another round and we need to fight to the end to get to the Final on Sunday”. However that didn’t happen when his side racked up 19 faults.

The 80 seconds time-allowed proved difficult to get, and there were only seven clear rounds from 58 starters today. The open water at fence five proved influential as did the final line of fences from the massive triple bar at 11 to the double of verticals at 12 and the final oxer at 13.

Some made it look easy however, and one of those was German pathfinder Deusser, and when team-mate Thieme collected just a single time fault they looked very comfortable indeed. But David Will and C Vier 2 picked up nine faults so Christian Ahlmann needed to tidy things up when last to go for the German side with Clintrexo Z who cruised home to add just one more time fault for the winning score.

Meanwhile the Spanish were really impressive in front of their home crowd, Manuel Fernandez Saro providing the discard score when Jarlin de Torres put a foot in the water but the remaining three – Ismael Garcis Roque (La Costa), Eduardo Alvarez Aznar (Legend) and Sergio Alvarez Moya (Alamo) – all only picking up a single time-fault each. Moya’s Alamo is still only 13 but has a remarkable record, winning the FEI Jumping World Cup™ title for Switzerland’s Steve Guerdat in 2019 and always consistent.

Talking about the horse, Moya said “everybody loves him, he’s a great horse, a great competitor, he’s easy at home and a beautiful horse. He’s owned by myself and Sergio Ramos, the best defender in the history of soccer who used to play for Real Madrid and who now plays with Paris Saint-Germain. He’s the player with the most games for the national team and a great guy too!”, the Spanish rider said proudly.

Tokyo 2020 Olympic individual bronze medallists Mikael van der Vlueten and Beauville Z kicked off with a clear round for The Netherlands, and when Sanne Thijssen followed suit with Con Quidam RB then the Dutch only had to count one of the four-fault results from Willem Greve (Carambole) and Harrie Smolders (Monaco) to qualify comfortably for Sunday.

Thijssen’s star has been rising rapidly this year, with sensational results from the 22-year-old athlete and her 15-year-old stallion. The pair had a successful run at Young Rider level together and she said today she was selected for this weekend’s prestigious Final because “my horse is in unbelievable form and he kept jumping clear and clear! He won the Grand Prix at Rotterdam and then at Oppglabeek and was second in the Grand Prix at Valkenswaard and he improved every time. I think we are a good combination together”, she said modestly.

And she’s an independent young lady. Asked if her father and former Dutch team rider Leon Thijssen is her trainer, she replied “no, he likes to let me do my own thing and I always did from the beginning. I learn a little bit from everyone but I don’t have one specific person that trains me and I like it that way!”, she pointed out.

As defending champions the Irish were feeling the strain when pathfinder Denis Lynch was eliminated. But Darragh Kenny, the only member of their winning team from 2019 competing again this time around, saved their day with a brilliant anchorman clear from VDL Cartello when Michael Duffy (Zilton SL Z) and similarly-named Michael G Duffy (Lapuccino 2) put five faults each on the board.

Kenny felt the heat going into the ring. “I knew that I had to be clear if we were going to try to be in the next round, but the horse was already jumping fantastic in the warm-up and I knew I just had to ride him well and he’d go the best he could. I was really happy with the way he jumped. We were a little unlucky with what happened with Denis, and the other two boys were great and we just have to pray we qualify now”, he said. As it happened they did.

He described Ireland’s Olympic effort this summer as “disappointing for all of us, we did our best going there and we had the best team we could but it just didn’t work out and now we’re just trying to put it all back together again”, he explained. And that makes this weekend’s result in Barcelona all the more critical.

That’s part of what makes the Longines FEI Jumping Nations Cup™ so appealing to every nation, and the decision about which country is relegated for 2022 will be made during tomorrow’s Challenge Cup which begins at 21.00 local time.