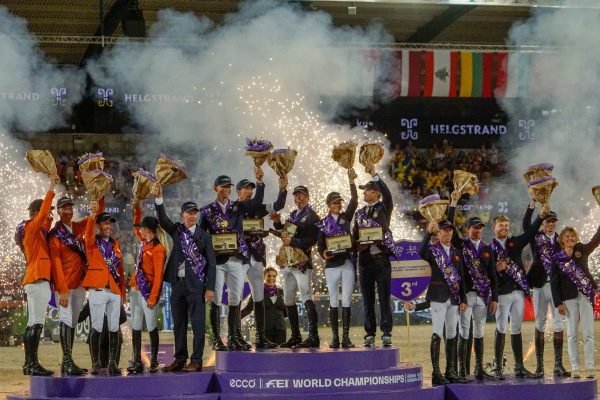 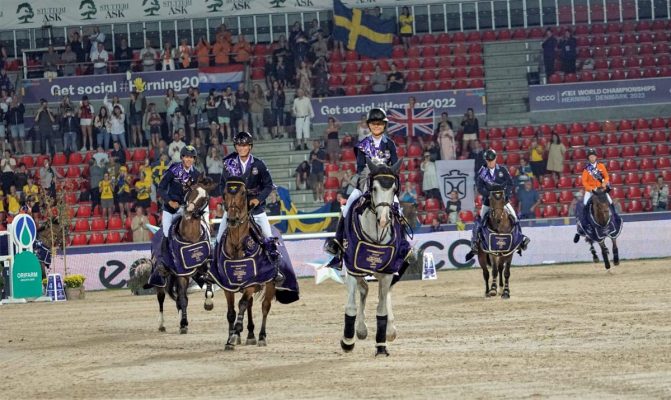 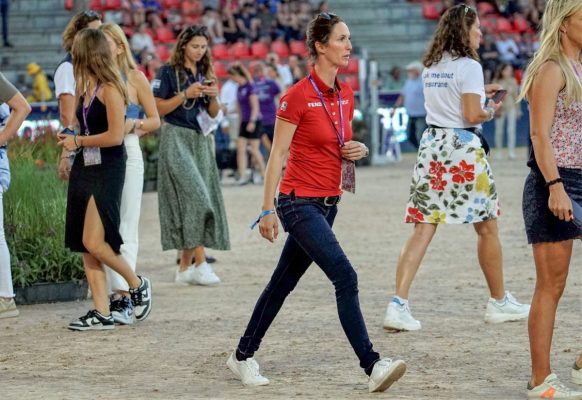 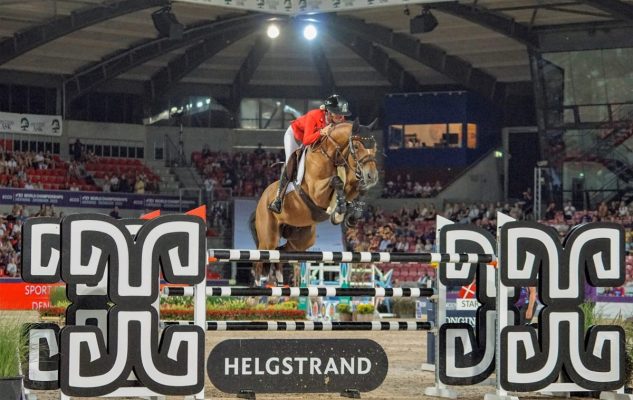 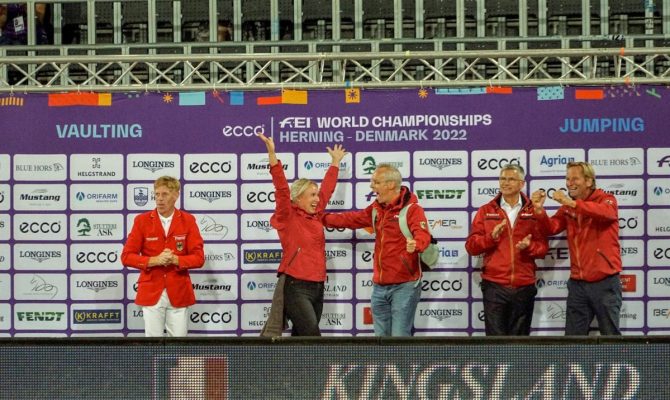 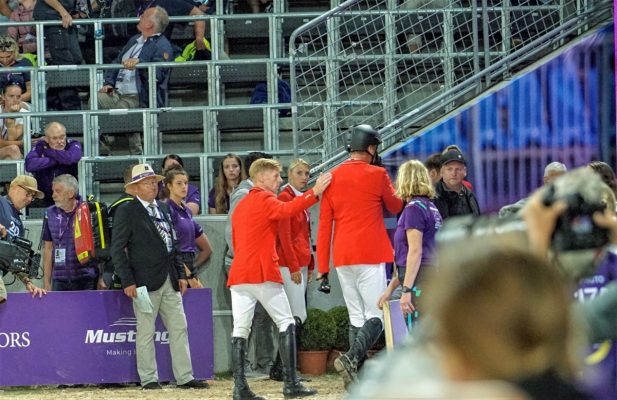 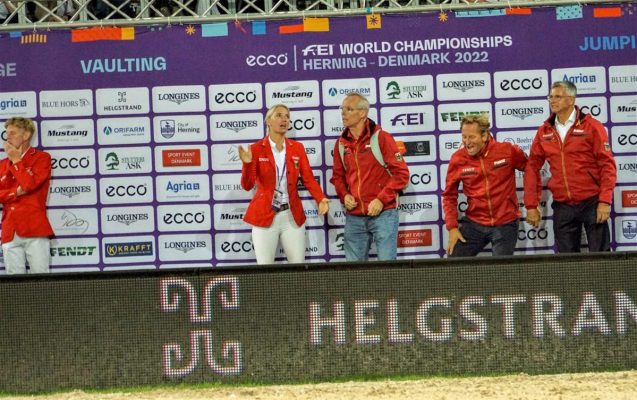 It seems Team Sweden’s time has truly come. A year ago Henrik von Eckermann, Malin Baryard-Johnsson and Peder Fredricson stood on the top step of the Olympic podium in Tokyo, and tonight, with the help of Peder’s brother Jens, they galloped away with Team gold at the Agria FEI Jumping World Championships in Herning, Denmark.

Sweden had never taken the World Championship team title before, coming very close with silver at Jerez in Spain in 2002 and then just pipped at the post at the last edition in Tryon, USA four years ago. They arrived in Denmark as firm favourites and more than lived up to their promise, finishing well clear of The Netherlands in silver medal spot and Great Britain in bronze.

And after an epic night in the Stutteri Ask Stadium they go into Sunday’s Individual Final with von Eckermann holding the lead ahead of Jens Fredricson. It’s quite some achievement.

Tonight’s competition was filled with drama and surprises. The Swedes held the lead from the outset on Wednesday, but had only a narrow advantage over the chasing French as tonight’s action began. However Dutch course designer Louis Konickx presented them with another masterful test in which finding the right rhythm, and then maintaining it around his 14-fence track, was never going to be easy.

One of the bogey fences was the penultimate triple combination, and that played a major role in dashing French chances when all four team-members faulted there. But for Germany, lying third as the action began, it was the elimination of reigning individual European champions Andre Thieme and DSP Chakaria when the mare jumped her rider out of the saddle over the oxer at fence three that spoiled their party.

Second-line rider, Jana Wargers, produced a spectacular round with Limbridge for a single time fault but the crowd were left gasping by Thieme’s early dismount, and with 13 faults to add the Germans, like the French, would drop out of medal contention.

In contrast the Dutch added only six faults to their scoreline and that would prove plenty good enough for silver. In an otherwise foot-perfect round Sanne Thijssen’s Con Quidam RB faulted only at the triple combination while Maikel van der Vleuten and the horse he steered to individual bronze in Tokyo last summer, Beauville Z, clipped the planks at four which also proved highly influential tonight. Jur Vrieling followed with a brilliant round from the big 10-year-old Long John Silver who collected just two time faults and when Harrie Smolders and Monaco were clear they rocketed up the leaderboard.

Meanwhile the British, lying sixth overnight, were also rallying strongly. Last year’s individual Olympic champion, Ben Maher, had the first fence down with Faltic HB who then completed the course effortlessly, while Joe Stockdale and Equine America Cacherel left only the second element of the double of oxers at fence nine on the floor.

A fabulous clear from Harry Charles and Romeo 88 was followed by an eight-fault run for Scott Brash and Hello Jefferson which saw this pair plummet from second to 13th in the individual rankings. But counting the best three team scores including Charles’ all-important zero, the final British tally of 22.66 would clinch bronze ahead of Ireland who missed the podium by less than a single penalty point while Team Germany were only another penalty point further adrift in fifth place.

It was some compensation for the Irish and Germans to clinch one of the five qualifying spots on offer for the Paris 2024 Olympic Games along with the three medal-winning nations.

The Herning spectators have ensured that the atmosphere in the Stutteri Ask Arena in Herning has been nothing short of electric this week, and Sweden’s Henrik von Eckermann had his work cut out to convince King Edward that it was safe to go in the ring tonight. “When he heard the applause and everything he turned around and went the other way! But he jumped amazing again and I’m looking forward to Sunday. He’s a very sensitive horse but in a fantastic way”, the Swedish star pointed out.

Jens Fredricson talked about the course, his horse, and his critical clear. “My horse tonight was very good, he jumped easily and with confidence and he was relaxed with a lot of power…and I was a little lucky at the last fence but you always need some luck! The time was tight and you were thinking about it all the way and couldn’t do extra strides anywhere and that puts more pressure on keeping the balance at high speed and on these turns – I think it was a very good course and I’m happy!”, he said.

“It’s been an amazing year”, he said.

Dutch Chef d’Equipe Jos Lansink, congratulated course designer Louis Konicks. “We had a fantastic course today, you made it difficult for the riders, they had no time to breathe in the course, from start to finish you had to move forward, that’s why we got so many mistakes I think. With my team we really wanted to qualify for Paris but it seemed very far away. And then after the round from Jur (Vrieling) with two time faults it looked better again and then after Harrie’s round we had a chance for a medal and to finish second is a nice bonus!”, he said.

Sanne Thijssen was delighted with Con Quidam. “He was unbelievable, he doesn’t really have the scope for this but he has such a big heart. When I saw the triple combination I thought it was really tough but he’s such a fighter and with one down I was quite satisfied. Of course you go for a clear, but I think it was quite a good result!”, she said modestly.

Harrie Smolders described the Dutch spirit that lifted them to silver medal spot.  “I think we came back very strong, we started in eighth place and yesterday we moved up to fourth and even halfway through today it didn’t look great for us. But we kept believing and I think this was a real team effort to go home with a medal”.

Bronze medallist Ben Maher said “it was a long way around after the first fence down, but Faltic has jumped great all week and it’s been fun. We have a new team with two younger riders and we all fought all the way to the end”.

And there was something very poignant about the fact that one of those two younger team members, 22-year-old Joe Stockdale who is still a relative rookie at this level of the sport, helped clinch team bronze for his country on the birthday of his late father, Tim Stockdale who was a stalwart of British teams throughout his successful career.

Yesterday Joe posted a 12-fault round and he wasn’t happy, but it was a very different story today. With the support of his team-mates he got right back on track.

“I made a bit of a mistake myself but I think the mare has jumped well all week and she’s come back today. I was delighted with how she jumped in the atmosphere and under the lights”, he said.

“Jumping at a World Championship has been a bit of a step up, but it’s been good having these guys alongside me, they’ve really guided me through this week. I’m lucky to have them on the team and they’ve been very helpful even when it’s gone a bit pear-shaped for me, they’ve all been behind me to help get me through it”, he explained.